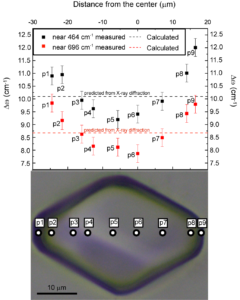 In her new paper published on American Mineralogist, Mara Murri, describes a method for determining the strains in quartz inclusions from Raman spectroscopy using the concept of the phonon-mode Grüneisen tensor, which we determine by ab initio DFT calculations. We provide the theoretical background, models and experimental validation to correctly interpret shifts of the measured Raman modes as strains acting on the inclusion. This allows us to show that using hydrostatic pressure calibrations to interpret Raman spectra of quartz inclusions can lead to underestimates of the entrapment pressure of as much as 0.6 GPa and, at the same time, we define the conditions under which the hydrostatic analysis provides results with small errors.

The past few years have seen significant developments in both the theory and application of host-inclusion geobarometry. However, the widespread application of Raman spectroscopy to determine the residual pressures on the inclusions as used in many recent studies, is still facing major issues. The basic issue is that published studies assume that the inclusion still entrapped in its host mineral is under hydrostatic pressure when measured, and that the measured Raman shift from the inclusion can be interpreted using hydrostatic calibrations. This is obviously wrong. An inclusion entrapped in an almost elastically isotropic host such as garnet, will be subject to isotropic strains and therefore anisotropic stress; not to a hydrostatic pressure. Further, publications in the geological literature have ignored the fact that Raman shifts in minerals are a result of imposed strains, not pressure, a fact recognized by Grüneisen as long ago as the 1920’s in his classic paper.

There are no upcoming events at this time.